Note that the Phylo Trading Card Game project currently has two major game mechanics. Instructions for both are listed below:

* note that these are instructions for the projects based card game – scientist card game is similar except there is no collaboration mechanic.

** note that the video details the scientists based card game which is very similar to the projects based game.

STEP ONE: You need to print a deck.

For beginners, we recommend using our BEATY starter deck (pdf), since it should have a good assortment of different kinds of cards necessary for play. Just download and print the above file – although it isn’t necessary, this is best done on card stock and in colour.

Once, you get the hang of the game, you can easily expand your deck by printing new cards. This, you can do by going to the card section, selecting cards you want (tick the “select” boxes), grouping your selected cards (by clicking the “selected cards” link), and then hitting the “print” button (the website will reformat and print cards that are currently on the screen – scroll through your selected cards by clicking the “next” button and keep printing each page until you are finished).  Note, that this is also how you might also make your own completely customized deck.

Also,  new pre-sorted decks will be continually added to the Deck List.  Often, these might be locale specific, and/or special decks made by educational institutions.

STEP TWO: Getting familiar with information presented on the cards.

This is something that will inevitably take a little bit of time to get use to.  Luckily, there’s nothing too complicated on the cards.  To speed things up a little, here is a picture showing you the basics of the most common sort of card (the “SPECIES” card).  You can also learn more by checking out the glossary section. 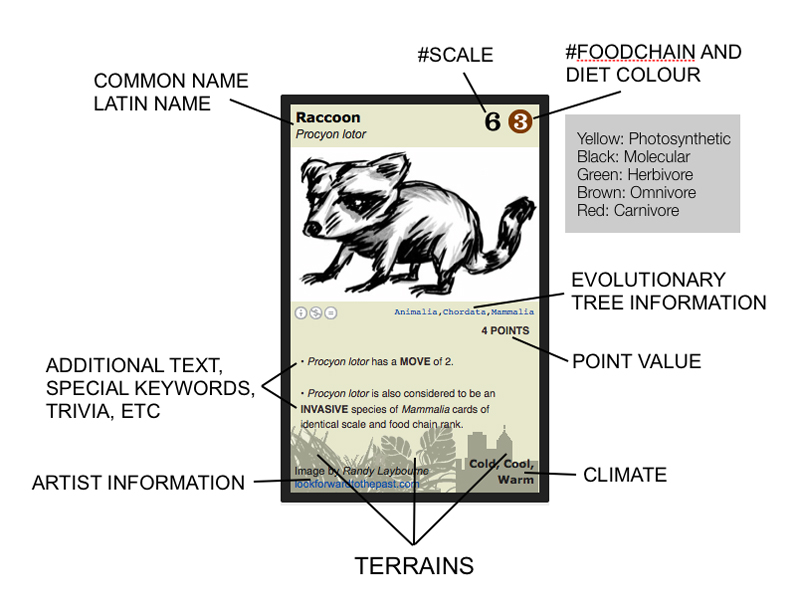 STEP THREE: Learn the rules of the game.

Because, Phylo is a crowd sourcing initiative, there exists the possibility of many different rules that can be used with the cards.  However, if you’re new to this game, we recommend focusing on our first two sets of rules.  One is designed for younger kids whilst the other for older (say about 8 and above).  See the following links for your needs:

Minimal Deck Required: At least one Starter Deck per 2 players is best. Also, all event and home cards should be removed.

Instructions: Cards are shuffled and distributed face down to all players.  Youngest player goes first by looking at his/her top card (the card that is visible).  He or she will place his/her card down on the table and call out one of the following stats:

Essentially, the player with the highest number wins the other player’s card and gets to put them in the back of his/her deck. In the event of a tie, then the players with equal numbers will place three cards face down, and then the fourth card face up. Players will look at the same stat again, with the highest number winning all cards on the table (if it is another tie, you keep continuing this two cards down, one card up, until a winner is found).

When a player loses all of their cards, they are out of the game. Winner is the last player left.

Number of players: 2 (possible with 3 and 4, although tricky with the rectangular card shape)

Minimal Deck Required: Each player needs a deck of at least 20 cards (1 home card + at least 19 others). More cards can be used but the 20 to 25 per person total is a reasonable size that won’t crowd a small tabletop size (cards are played on a table top and take up space!). A general tip for constructing your own deck is to make sure you have at least 10 #FOODRANK=1 cards, as well as making sure that there aren’t any terrains or climates that are super rare. As well, the more event cards you have, the more interesting (and strategic) the game can get!

There are 2 players sitting at a table across from each other. Before starting, the table will have two home cards placed next to each other, one for each player and also “facing” that player. Players will also each have their own deck of 20+ cards and their own discard pile. These player decks can be custom built, or shuffled randomly from a starter deck.

Place two HOME CARDS in the center. ONE FACING EACH PLAYER.

Each Player picks up 5 cards and put the rest of the cards in a pile called the PICK-UP DECK. Cards that are removed from the game go into a DISCARD PILE.

The two players will take turns. In each TURN, they can pick up a new card and make 3 ACTIONS.

ACTIONS YOU CAN MAKE:
– PLAY a card in your hand onto the table (make sure you play them facing you).
– DROP a card in a DISCARD PILE and PICK UP three cards.
– MOVE a card (# of moves is on the card itself). MOVE# tells you how many spots the card can move. Up
down left right movement only (no diagonal unless it says FLIGHT), and it must end up in a free space.
– You may PASS.

FOODCHAIN#2 cards must be placed next to at least 1 compatible FOODCHAIN#1 cards.

Note that there are exceptions to these general placement rules. For example, omnivores (brown circle) are FOODCHAIN#3 but can technically be played next to plants of FOODCHAIN#1. Other exceptions may be highlighted in the card text.

In general, whether a card can be played (or needs to be discarded) depends on whether it is next to something that can sustain it. Also NOTE that it’s o.k. to place your card next to opponent’s cards.

When an EVENT card is played, unless specified differently, the effect is immediate and then the EVENT card is removed from the table (into discard pile). Sometimes, the effect will result in broken food chains. Here, the opposing player has their next TURN (i.e. 3 ACTIONS) to react to the EVENT card, before disconnected cards are removed (i.e. they can play a substitute card to replenish the food chains, or they can move cards to areas on the table that provide compatible linkage).

Optional Rule: Sometimes, two cards will be played next to each other where it works according to the game’s rules, but would never actually happen in real life. This might be because the two species don’t actually live in the same country, despite sharing compatible terrains and climates. Or it might happen because according to scientific study, a species diet might be quite special and limited to certain types of things, so that whilst a card might “fit” as food (according to the rules), it wouldn’t actually be eaten in real life.

Because of this, you can play the game where you agree not to worry about such things, or you can play the game where you include a “call your bluff” rule. Here, in a way similar to the game Scrabble, a player can challenge these strange connections by using Wikipedia or the Encyclopaedia of Life to check for something that may be inaccurate. Whoever wins this “call your bluff” gets to remove any card from the table with immediate consequences (i.e. no giving a player a turn to react). Note that sometimes, this will be hard to check. To help, some future decks may provide a food web key to help

NOTE: pdfs of working starter decks would be great!  Send suggestions to the forum!

We welcome other game ideas, especially if they can make use of the root information displayed on the SPECIES cards. Other interesting ideas might include:

Really, because the number of cards we can aim to make is truly immense, the possibilities of how these cards might be used is also endless. Anything goes* – we’ve even had suggestions on Pokemon vs Phylomon type activities (my money would be on Raccoon all the time)!

If you have an idea you like to work on, or contribute to, please check out the phylomon forum, add to a thread, or even better start a thread with a rough outline. Anything that looks like it has good potential will be exhibited on this official website for further commenting or testing.