Game designed by Fenrislorsrai and ColinD (with help, particularly with food chain mechanics by Naturalismus). Editorial  oversight and figures by db
Initial notes in the Phylomon Forum (link) | Food chain ideas can also be viewed here. | ColinD sent a very elaborate email | Previous post of this rule set can be found here.

TO DO LIST:
– Work out a good number of cards in starting deck (per player)
– Suggest an initial set of cards (including number of species, number of habitats, number of environmental challenges, appropriate terrain/climate stats). This one is especially important, because here we can canvas the web for appropriate images.
– Suggest play effects of Environmental Challenge cards.
– Beta test these general rules and leave feedback.
– Two particular concerns with current rules. (1) 1st player has huge advantage since his/her first habitat card play need not link properly, (2) When to end the game is confusing.

Two players work to build an ecosystem that is complete with various habitats and many different species. However, the player with the most number of species at the end of the game is the winner. Can you ensure your victory by strategically (1) setting up your habitats, (2) building variation into your food webs, and (3) calculating migration possibilities: all in an attempt to minimize biodiversity loss should an environmental challenge come your way.

There are three main types of cards:

SPECIES CARDS: These are cards that represent the various organisms on our planet Earth. In essence, all statistics on the card aim to describe the creature as in real life (i.e. the cards are also like fact holders). Species cards have a number of attributes on them that are noteworthy, including #SCALE, #FOODCHAIN, DIET (a colour), as well as habitat information (various combination of TERRAINs and CLIMATEs). Many species will also have other written information on the card. Most common includes information on MOVEment, but there may be other keywords such as POLLINATOR, INVASIVE, PARASITIC (others may be developed as the game evolves).

ENVIRONMENTAL CHALLENGE CARDS: These cards define some sort of environmental situation, which will often change the habitat’s TERRAIN or CLIMATE. Consequently, this will tend to have a domino effect on the other cards built around the habitat. Note that some environmental challenge cards may instead be used on Species Cards. The number on the top of these cards will signify duration – if there is no number, then the effect is permanent. A strategic element of this game will largely depend on building ecosystems that can adapt to such environmental challenges.

The 2 players will sit facing each other. They will each have a deck of 40 cards. Decks can be thematic (i.e. only locale specific cards), or hand chosen by the player from the Phylo website. NOTE: the number of cards in the starting deck may need to change.

Draw 5 cards from your deck. Player with the least number of habitat cards goes first (in the event of a tie, use good old rock, paper, scissors).

Whenever cards are placed down, they are play facing the player to distinguish possession. During each turn, a player does the following in this order:

1B. Any species card that has been played and you have physically seen in the wild (and documented with your own photo) you may use its MOVE capabilities if you want (once per card per turn). -This step can be used if players wish to incorporate real wildlife spotting into game.

3. Remove cards under your control that are no longer properly connected to a habitat. These go into your discard pile. Your opponent will probably help you out here! (this is done after the three actions so that you have an opportunity to react to ecosystem changes introduced by the other player)

4. Alternate turns. When a player has taken their last card from their deck, the game ends at the conclusion of the other player’s turn.

5. Winner is the player with the most number of species under his/her control that are still left in play.

EXAMPLE OF PLAY (WITH DIAGRAMS)

Let’s say you get to go first. You have 5 cards in your hand, but your first card played must be a habitat card (this will also counts as one action). Place the habitat card facing you. Then you may use your two other actions – examples include the following: 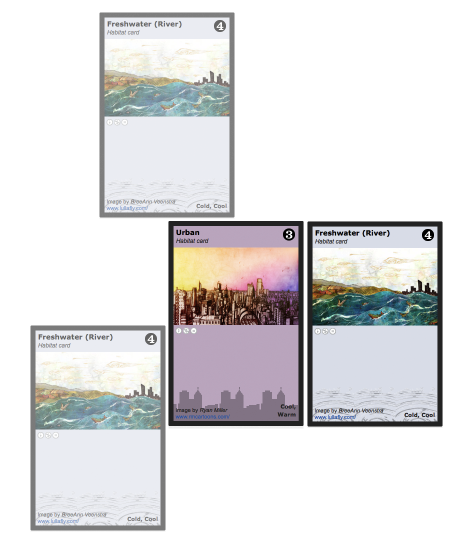 You can play a species card. Generally, Species cards need to be placed next to card with a #FOODCHAIN value equal to or one below. However, like a real food web, there are some notable exceptions and additional rules.

You can see in the figure below, an example of where the European Honey Bee can be placed, and where it cannot (The position marked X cannot be used because even though there are TERRAIN and CLIMATE matches, the Bee’s #FOODCHAIN value of 2 needs to be placed next to something with a #FOODCHAIN value of 1) 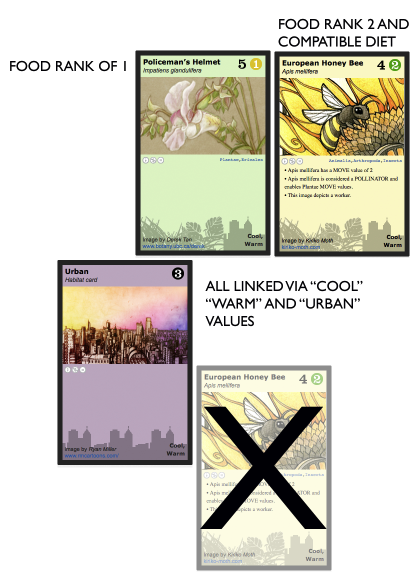 Now let’s say you’re done, and it’s now the other player’s turn. Throughout the game, your opponent will place cards on the table so that they are facing him/her (i.e. in the opposite direction – this is how you can tell each other’s apart). Note that a player cannot place species cards down, unless they are next to a card under his/her control. Therefore, since we are at the start of the game, this will mean that your opponent will need to first play a habitat card. However, this habitat card must still have a matching CLIMATE value of its adjacent card. For example, see below where the figure illustrates various placements of your opponent’s Forest habitat card. 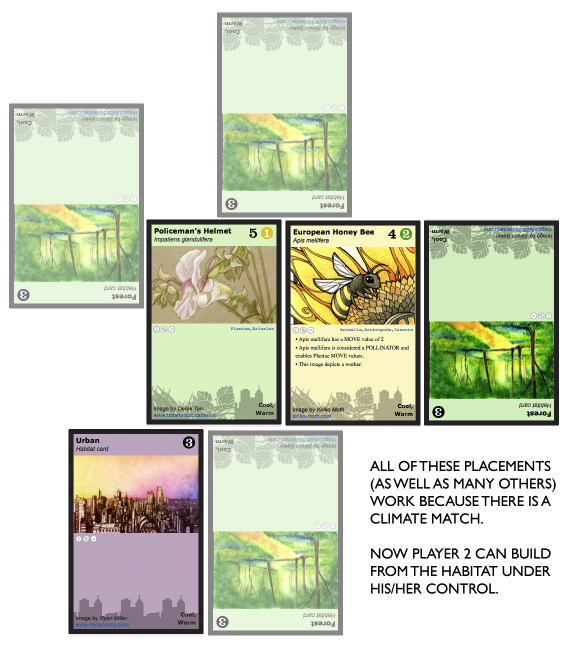 From here, your opponent can now build upon that habitat card with his/her remaining actions.

As an example, look at the below figure of where your opponent might want to place a species card. In this case, there are two options shown (A and B): the point of which is to demonstrate that position B is better for your opponent, since placing the card in position A inadvertently protects your Bee card. 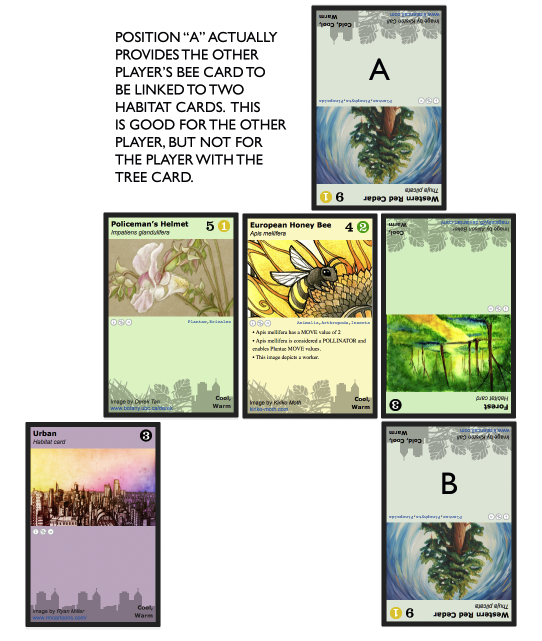 Ultimately, the point of the game is to place as many species cards down such that each species card can be linked back to a habitat card through CLIMATE, TERRAIN, #FOODCHAIN, and DIET values.

The below figure shows the valid connections, as defined by these attributes (as well as the range of the habitat), currently in play in the game: 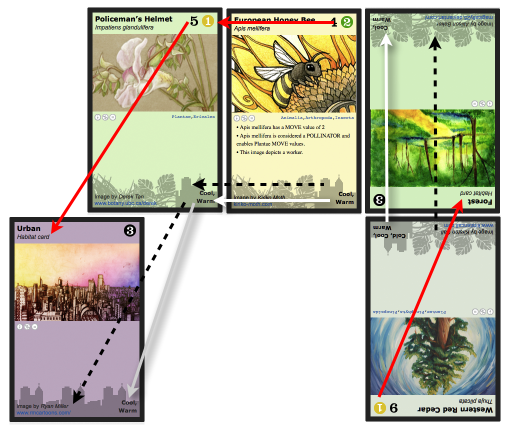 Therefore, at this point in time, the score is 2 species (you) to 1 species (your opponent)!

Movement of Species cards allows protection by moving onto the other player’s habitats, or by escaping the possible effects of an Environmental challenge.

MOVE values are usually shown as text in the middle of the card. The value signifies the distance that card can move each action. For example, the European Honey Bee card has a MOVE value of 2. Therefore it is able to move any two “spots” as long as the final resting place is unoccupied.  Examples of how “2 moves” can look is shown in the figure below: 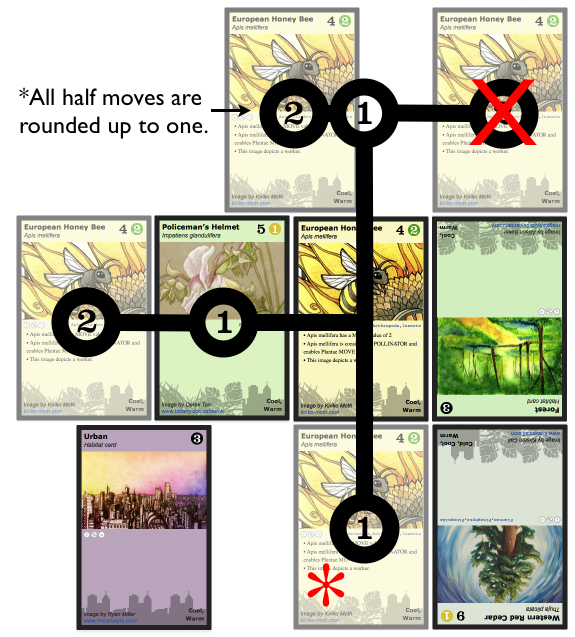 Note that also in this figure, we have a chance to see a bad move (the “X”, since now that card is not properly connected to any habitat and therefore must be removed), versus a good move (the “*”, whereby now the Bee card is now linked to the opponent’s habitat card making it less susceptible to Environmental challenges your opponent might play – although instead it may now be vulnerable to challenges you might play).

As well (and although it’s not necessary, we’d like to encourage playing this version of the game), players can also add strategic value to their species cards if they have actually seen the organism in the wild (say, as documented by a photo on their digital camera). This allows the player to MOVE the organism without using up one of the three actions.

Players may choose to use an Environmental Challenge card as one of their actions. Here, they will place the card on top of any habitat of their choosing (it can be their card or an opponent’s card). These Environmental Challenge cards will have a description on them that details their effect. For example, the below figure illustrates the effects of your opponent playing a Flood card. Here, the card will temporarily alter the habitat’s TERRAIN to freshwater for the number of turns (2 turns) as shown on the card. 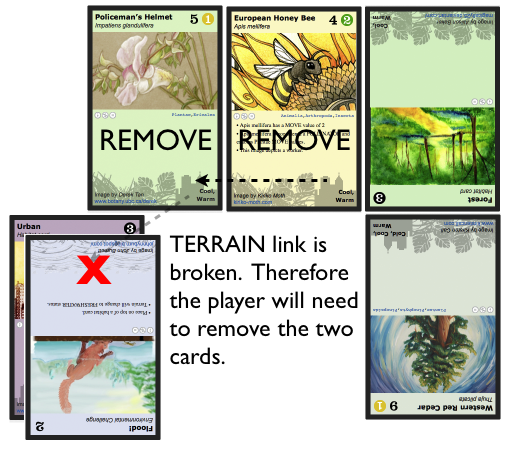 Essentially, this will disrupt TERRAIN linkage from habitat to species. Specifically, as shown in the figure, this means that two species cards will need to be removed. These removed cards will go into a discard pile.

Note that not all Environmental Challenge cards are played on habitat cards. Some may be specific to certain species cards as defined in the description written on the card.

INVASIVE: If a species is considered invasive, the player can play this species card on top of another as instructions dictate. The card underneath is no longer worth a point.

PARASITIC: If a species is considered parasitic, the player can play this species card underneath another as instructions dictate. Both cards are worth points.

POLLINATOR: A pollinator if placed adjacent to a plant, can allow the plant to spread. Spreading can be shown by using cards from the person’s hand placed upside down. Note that these extra cards do not provide additional points, but may create better ecosystems by improving how species and habitats are linked to each other. Using a pollinator to place an upside down card will use up an action.

When a player has taken their last card from their deck, the game ends at the conclusion of the other player’s turn.Winner has the highest number of species under their control.