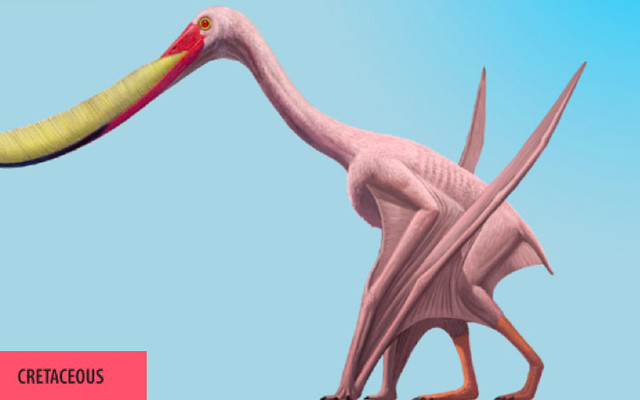 Sorry, there is no photo available. If you have one, please submit here .
Animalia, Chordata, Pterosauria

Play: FLIGHT of 1
This pterosaur’s name comes from the Greek word “pteron” (wing) and the Latin word “auster” (south wind). It may have used its thousands of bristle-like teeth to strain crustaceans, plankton, and other small aquatic animals.

warm, hot
Graphic by Raúl Martinwww.amnh.org/
Pterodaustro is a genus of Cretaceous pterodactyloid pterosaur from South America, which lived 105 million years ago. The first fossils, among them the holotype PLV 2571, a thigh bone, were in the late sixties discovered by Bonaparte in the Lagarcito Formation, situated in the San Luis Province of Patagonia, Argentina, and dating from the Albian. […] read more
Sorry, there is no photo available. If you have one, please submit here.

Pterodaustro is a genus of Cretaceous pterodactyloid pterosaur from South America, which lived 105 million years ago.

The first fossils, among them the holotype PLV 2571, a thigh bone, were in the late sixties discovered by Bonaparte in the Lagarcito Formation, situated in the San Luis Province of Patagonia, Argentina, and dating from the Albian. The genus has later also been found in Chile in the Santa Ana Formation. At the Argentine site, the just 50 m² large “Loma del Pterodaustro“, since then during several expeditions over 750 Pterodaustro specimens have been collected, 288 of them having been catalogued until 2008. This makes the species one of the best known pterosaurs, with examples from all growth stages, from egg to adult.

The genus was named in 1969 by José Bonaparte as an as yet undescribednomen nudum. The first description followed in 1970, making the name valid, the type species being Pterodaustro guiñazui.[1] The genus name is derived from Greek pteron, “wing” and Latin auster, “south (wind)”. The elements are combined as a condensed pteron de austro, “wing from the south”. The specific name honours paleontologist Román Guiñazú. It was emended in 1978 by Peter Wellnhofer into guinazui, because diacritical signs such as the tilde are not allowed in species names.

Pterodaustro has a very elongated skull, up to 29 centimetres long. The portion in front of the eye sockets comprises 85% of skull length. The long snout and lower jaws curve strongly upwards; the tangentat the point of the snout is perpendicular to that of the jaw joint. Pterodaustro has about a thousand bristle-like modified teeth in its lower jaws that might have been used to strain crustaceans, plankton, algae, and other small creatures from the water.[2] These teeth stand for the most part not in separate alveoli but in two long grooves parallel to the edges of the jaw. They have a length of three centimetres and are oval in cross-section, with a width of just 0.2 – 0.3 millimetres. At first it was suspected these structures were not true teeth at all, but later research established they were built like normal teeth, including enamel, dentine and a pulpa. Despite being made of very hard material, they might still have been flexible to some extent due to their extreme length-width ratio, a bend of up to 45° being possible.[3] The upper jaws also carried teeth, but these were very small with a flat conical base and a spatula-formed crown. These teeth also do not have separate tooth sockets but were apparently held by ligaments in a special tooth pad, that was also covered with small ossicles, or bone plates.

The back of the skull was also rather elongated and in a low position; there are some indications for a low parietal crest.

Pterodaustro had an adult wingspan of approximately 250 centimetres (8.20 ft).[4] Its hindlimbs are rather robust and its feet large. Its tail is uniquely elongated for a pterodactyloid, containing 22 caudal vertebrae, whereas other members of this group have at most sixteen.