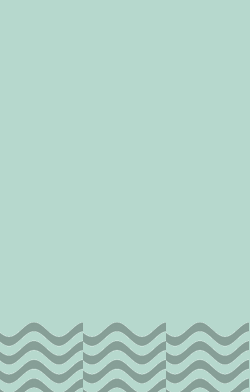 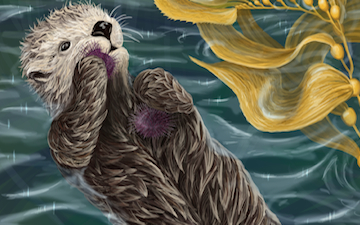 Play: Enhydra lutris has a MOVE of 2

Fact: Enhydra lutris have the densest fur in the animal kingdom, with nearly one million hairs per square inch.

The sea otter (Enhydra lutris) is a marine mammal native to the coasts of the northern and eastern North Pacific Ocean. Adult sea otters typically weigh between 14 and 45 kg (30 to 100 lb), making them the heaviest members of the weasel family, but among the smallest marine mammals. Unlike most marine mammals, the sea otter’s primary form of insulation is an exceptionally thick coat of fur, the densest in the animal kingdom. Although it can walk on land, the sea otter lives mostly in the ocean.

The sea otter inhabits offshore environments where it dives to the sea floor to forage. It preys mostly upon marine invertebrates such as sea urchins, various molluscs and crustaceans, and some species of fish. Its foraging and eating habits are noteworthy in several respects. First, its use of rocks to dislodge prey and to open shells makes it one of the few mammal species to use tools. In most of its range, it is a keystone species, controlling sea urchin populations which would otherwise inflict extensive damage to kelp forest ecosystems. Its diet includes prey species that are also valued by humans as food, leading to conflicts between sea otters and fisheries.

Sea otters, whose numbers were once estimated at 150,000–300,000, were hunted extensively for their fur between 1741 and 1911, and the world population fell to 1,000–2,000 individuals in a fraction of their historic range.[2] A subsequent international ban on hunting, conservation efforts, and reintroduction programs into previously populated areas have contributed to numbers rebounding, and the species now occupies about two-thirds of its former range. The recovery of the sea otter is considered an important success in marine conservation, although populations in the Aleutian Islands and California have recently declined or have plateaued at depressed levels. For these reasons the sea otter remains classified as an endangered species. A sea otter’s thick fur makes its body appear much plumper on land than in the water.

Unlike most other marine mammals, the sea otter has no blubber and relies on its exceptionally thick fur to keep warm.[24] With up to 150,000 strands of hair per square centimeter (nearly one million per sq in), its fur is the most dense of any animal.[25] The fur consists of long waterproof guard hairs and short underfur; the guard hairs keep the dense underfur layer dry. Cold water is thus kept completely away from the skin and heat loss is limited.[22] The fur is thick year-round, as it is shed and replaced gradually rather than in a distinct molting season.[26] As the ability of the guard hairs to repel water depends on utmost cleanliness, the sea otter has the ability to reach and groom the fur on any part of its body, taking advantage of its loose skin and an unusually supple skeleton.[27] The coloration of the pelage is usually deep brown with silver-gray speckles, but it can range from yellowish or grayish brown to almost black.[28] In adults, the head, throat, and chest are lighter in color than the rest of the body.[28]

The sea otter displays numerous adaptations to its marine environment. The nostrils and small ears can close.[29] The hind feet, which provide most of its propulsion in swimming, are long, broadly flattened, and fully webbed.[30] The fifth digit on each hind foot is longest, facilitating swimming while on its back, but making walking difficult.[31] The tail is fairly short, thick, slightly flattened, and muscular. The front paws are short with retractable claws, with tough pads on the palms that enable gripping slippery prey.[32]

The sea otter propels itself underwater by moving the rear end of its body, including its tail and hind feet, up and down,[30] and is capable of speeds of up to 9 km/h (5.6 mph).[8] When underwater, its body is long and streamlined, with the short forelimbs pressed closely against the chest.[33] When at the surface, it usually floats on its back and moves by sculling its feet and tail from side to side.[34] At rest, all four limbs can be folded onto the torso to conserve heat, whereas on particularly hot days the hind feet may be held underwater for cooling.[35] The sea otter’s body is highly buoyant because of its large lung capacity – about 2.5 times greater than that of similar-sized land mammals[36] – and the air trapped in its fur. The sea otter walks with a clumsy rolling gait on land, and can run in a bounding motion.[31]

Long, highly sensitive whiskers and front paws help the sea otter find prey by touch when waters are dark or murky.[11] Researchers have noted that when they approach in plain view, sea otters react more rapidly when the wind is blowing towards the animals, indicating that the sense of smell is more important than sight as a warning sense.[37] Other observations indicate that the sea otter’s sense of sight is useful above and below the water, although not as good as that of seals.[38] Its hearing is neither particularly acute nor poor.[39]

An adult’s 32 teeth, particularly the molars, are flattened and rounded, designed to crush rather than cut food.[40] Seals and sea otters are the only carnivores with two pairs of lower incisor teeth rather than three;[41] the adult dental formula is

The sea otter has a metabolic rate two or three times that of comparatively sized terrestrial mammals. It must eat an estimated 25 to 38% of its own body weight in food each day in order to burn the calories necessary to counteract the loss of heat due to the cold water environment.[43][44] Its digestive efficiency is estimated at 80 to 85%,[45] and food is digested and passed in as little as three hours.[24] Most of its need for water is met through food, although, in contrast to most other marine mammals, it also drinks seawater. Its relatively large kidneys enable it to derive fresh water from sea water and excrete concentrated urine.[46]