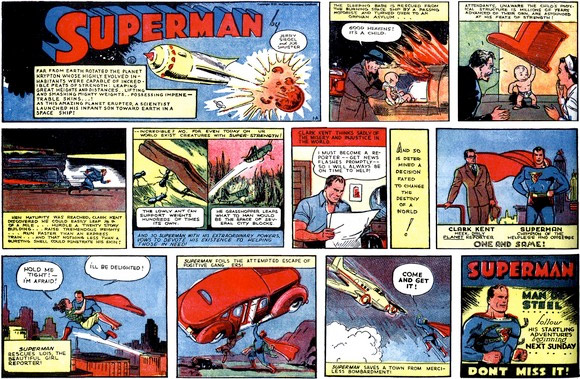 I thought it would be appropriate to have in the blog section of the website, a sort of origin story. You know, where we pretend this whole Phylo or Phylomon thing is a comic book superhero and then talk a bit about how exactly things came to be. In other words, think of this post as the proverbial “hit by a lightning bolt in the lab”, “bit by a radioactive spider” or the “long long ago in a galaxy far far away” tale.

Actually, maybe the story about a “rocket leaving the planet Krypton” would work better here. This is because the rocket of an idea would definitely be Andrew’s original paper on children’s cognition of Pokemon versus wildlife creatures. This was published way back in 2002, and it was the sort of paper that was a great story when one was talking about science and education. However, at the time, I also remember thinking, “That is a freakin’ awesome idea.”

In any event, it wasn’t until 2007 that I had a chance to follow up with Andrew and inquire whether anyone had run with the biodiversity cards in earnest – at least at a level where a large section of biodiversity could be covered. At the time, he basically said “Not really,” and so I suggested how a web-based effort might do the trick, and also queried whether he’d be o.k. with someone like myself taking on that challenge.

Graciously, he agreed – with the stipulation that he would also like a robust follow-up on the educational merits of such a project. But to me, this was a marvelous stipulation, since I happen to be mostly involved in science education anyway.

Good to hear from you, and apologies for being slow repyling, but I’m pretty crap on keeping up with email.

We never did anything with the Pokemon idea – our intention was simply to throw it out there in the hope someone would pick it up. So I’m pleased you’re interested – please let me know a bit more about your plans. This could be fun.

And so, it was at this moment that the spaceship took off from planet Krypton.

Still, if you recall, Kryptonians only have their super powers in the right environment, and the issue of environment was also key in the development of this project. This is where over the next few years, the idea basically took its time hurtling through space, partly due to the general chaos that envelops an academic’s time (i.e. things got busy), and partly due to wanting to make sure Andrew’s idea was done right.

Over these two or so years, a few pertinent notes were made:

1. That the project would be a full-on non-commercial, educational endeavour, that would fully adhere to open source/open access ideals and rely essentially only on crowd sourcing talent.

2. That the aforementioned talent would presumably involve communities interested in artistic, scientific, game design, and computer programming activities. And related to this, whoever happens to sit in as a “moderator” will more or less defer opinion to “persons who seem to know what they’re talking about.”

4. That anyone with access to a computer and internet could also contribute feedback or content and recognize that their comments and works are valued and will be protected.

6. That we would have a working document of general design of the website ready to go (you can actually download this old pdf here)

7. That the project would be called “Phylomon” because it’s kind of catchy, and was also determined to be a favourite after informal polling with a few hundred children ages 6 to 14.

8. That true to my initial reaction, we would do whatever we can to make sure the project meets the “freakin’ awesome” criteria.

Anyway, after much strategic thought, it was decided that the project would begin in earnest in January 2010. This date was primarily chosen because 2010 happens to be the International Year of Biodiversity, which seemed a fitting time to start.

Interestingly, it was also decided that we do a “soft” launch in January 2010 – January 11th to be exact (at two places on the web, the SCQ and The World’s Fair). This meant that we would only seed the “idea” out there into the web (i.e. no functional website per se). It was a little risky because we imagined folks would take us less seriously, but we thought it a necessity as it would give us some time to gather the collected wisdom from the various web communities, and make use of such feedback as things were being designed, programmed, etc.

Along with this “soft” launch, we would set up a Flickr account and specifically a few Flickr groups designed to court art submissions (we ask three artists to start the process – thanks to Randy, Colin and Ele!). Plus, we also created a Facebook group and a FriendFeed page since we thought that these may make decent places for focused discussion. Then we would sit back, cross our fingers and wait…

Except that we didn’t have to wait long. Almost immediately, a number of blogs picked up on the story. And some, being quite high profile catalyzed a number of graphic artists signing up, as well as a number of art submissions.

Interestingly, from the comments left on these various blog posts, it became clear that gamers wanted a place to hold discussions and that the FriendFeed portal and Facebook group wouldn’t cut it in this regard (gamers are a vocal bunch). So, on January 29th, 2010 we decided to set up a free forum, where folks could converge and discuss all things phylomon.

This proved to be an excellent move in that very quickly a community was established. In fact, within a week, there was already much discussion and debate about the artwork, about the logo, about the game itself, and indeed by the first week, we even had some folks go to the trouble of putting up great ideas and some very detailed game rules!

One of the more interesting discussions that came from the forums was the issue of copyright. This initially began with a thread comment where a patent held by Wizards of the Coast (a holding of Hasbro) was shared. This was useful because it provided some information on game mechanics to be avoided. It also brought up the issue of trademark infringement – specifically, the nuance where our project was called phylo”mon” which in court could be argued to benefit from implied recognition of the Pokemon brand.

Anyway, to find out more about this, I was able to have a great conversation with Cory, which culminated in the decision to rename the project “Phylo.” Granted, this wasn’t as cool, but the consensus was that it would avoid possible “potential” headaches down the road. As well, it doesn’t stop the community from calling it the phylomon project anyway – just that we had to make sure the official branding generally went with the phylo moniker.

About the same time, the project received a request for an interview from WIRED magazine (the UK version). More importantly, this forced a deadline for producing a reasonable graphic of what the cards might look like. As a result, the forum comments were examined for all feedback on card content, and we decided to place the following key pieces of information on the cards:

As well, there would be a space for text in the middle of the card, where “special” attributes could be entertained.

Essentially, the cards would probably looked a little like the below (this also being an example of the sort of files we sent to WIRED magazine): 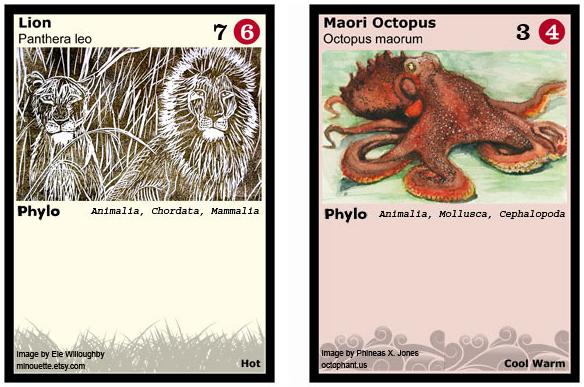 Interestingly, these graphics seemed to please a bunch of people (maybe it made the project more real), since we noted an appreciable jump in art submissions around this time.

In any event, we were happy with the card design because ultimately it was done in a way that could be mimicked easily with basic CSS formatting (jargon for dynamic card production pulling data from various places). For us, that meant we can publish cards “in the lowest maintenance” way possible.

This is where UBC’s Office of Learning Technology (and specifically Enej Bajgoric, who did most of the programming) really stepped up (seriously, I’m sure Enej is busy, but you should hire the dude anyway). They did an amazing job in producing a wordpress template that essentially did everything we had initially hoped for. In other words, we had ourselves a worthy beta!

Anyway, this site went through some majoring tinkering during the month of March, but by the beginning of April, we had already seen:

100+ artists sign up in our Flickr groups
250+ images submitted (about 50% illustration and 50% photography)
50+ members in the Forum
Enough content for a 50 card set.
1 set of rules, ready for testing.
Collaborative feelers from a variety of media outlets, programmers, educators, etc.

Which brings us to early April, and here you have it – DUM DUM DUM! – the website itself. Now we are (more or less) ready and waiting for the next steps. The rocket has landed on Planet Earth so to speak. Our initial goals are to have a workable set of rules by May/June and an official starter deck ready. We also plan on releasing new cards at a minimal rate of approximately one per weekday (at this very moment, we have enough content to do this for about 2 months, and hopefully as more people contribute we can continue indefinitely).

You know, we really do hope that this project lights a little biodiversity fire in the hearts and minds of people who use it. After all, it’s very true what E.O. Wilson once said:

“When you have seen one ant, one bird, one tree, you have not seen them all.”