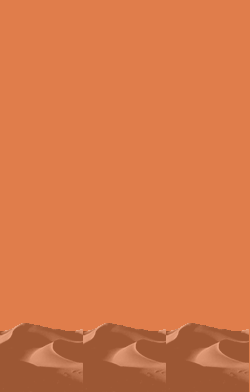 2 POINTS • This is a HABITAT card. You can start to build SPECIES from this card or connect to existing “compatible” networks. • This card cannot be removed once played.

Hot
Graphic by Justin Millerwww.justindmiller.com
Photo by James Marvin Phelpswww.flickr.com/photos/mandj98/
A desert is a landscape or region that receives an extremely low amount of precipitation, less than enough to support growth of plants. Deserts are defined as areas with an average annual precipitation of less than 250 millimetres (10 in) per year,[1][2] or as areas where more water is lost by evapotranspiration than falls as […] read more

A desert is a landscape or region that receives an extremely low amount of precipitation, less than enough to support growth of plants. Deserts are defined as areas with an average annual precipitation of less than 250 millimetres (10 in) per year,[1][2] or as areas where more water is lost by evapotranspiration than falls as precipitation.[3] In the Köppen climate classification system, deserts are classed as BWh (hot desert) or BWk (temperate desert). In the Thornthwaite climate classification system, deserts would be classified as arid megathermal climates.[4][5]

Deserts are part of a wide classification of regions that, on an average annual basis, have a moisture deficit (i.e. they can potentially lose more than is received). Deserts are located where vegetation cover is sparse to almost nonexistent.[1][6] Deserts take up about one third (33%) of the Earth’s land surface.[1] Hot deserts usually have a large diurnal and seasonal temperature range, with high daytime temperatures, and low nighttime temperatures (due to extremely low humidity). In hot deserts the temperature in the daytime can reach 45 °C/113 °F or higher in the summer, and dip to 0 °C/32 °F or lower in the winter. Water acts to trap infrared radiation from both the sun and the ground, and dry desert air is incapable of blocking sunlight during the day or trapping heat during the night. Thus, during daylight most of the sun‘s heat reaches the ground, and as soon as the sun sets the desert cools quickly by radiating its heat into space. Urban areas in deserts lack large (more than 14 °C/25 °F) daily temperature variations, partially due to the urban heat island effect.

Many deserts are formed by rain shadows; mountains blocking the path of precipitation to the desert (on the lee side of the mountain). Deserts are often composed of sand and rocky surfaces. Sand dunes called ergs and stony surfaces called hamada surfaces compose a minority of desert surfaces. Exposures of rocky terrain are typical, and reflect minimal soil development and sparseness of vegetation. The soil is rocky because of the low chemical weathering.

Bottomlands may be salt-covered flats. Eolian processes are major factors in shaping desert landscapes. Polar deserts (also seen as “cold deserts”) have similar features, except the main form of precipitation is snow rather than rain. Antarctica is the world’s largest cold desert (composed of about 98 percent thick continental ice sheet and 2 percent barren rock). Some of the barren rock is to be found in the so-called Dry Valleys of Antarctica that almost never get snow, which can have ice-encrusted saline lakes that suggest evaporation far greater than the rare snowfall due to the strong katabatic winds that evaporate even ice.

The largest hot desert is the Sahara in northern Africa, covering 9 million square kilometres and 12 countries.

Deserts sometimes contain valuable mineral deposits that were formed in the arid environment or that were exposed by erosion. Due to extreme and consistent dryness, some deserts are ideal places for natural preservation of artifacts and fossils.