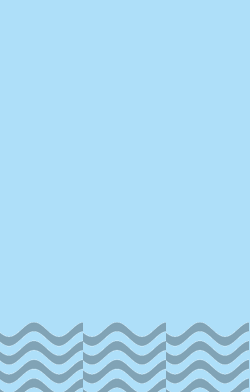 6 POINTS • Thunnus thynnus has a MOVE of 3. “Female bluefin are thought to produce up to 40 million eggs.”

Cold, Cool
Graphic by Dan Deiblerwww.flickr.com/photos/tunamatrix
The Atlantic bluefin tuna (Thunnus thynnus), also known as the northern bluefin tuna, giant bluefin tuna (for larger individuals exceeding 150 kilograms or around 300 pounds) and formerly as the tunny, is a species of tuna native to both the western and eastern Atlantic Ocean, as well as the Mediterranean Sea. Atlantic bluefin have been […] read more
Sorry, there is no photo available. If you have one, please submit here.

Atlantic bluefin tuna are capable of reaching well over a thousand pounds (450 kilograms) in weight, and rival the black marlin and blue marlin as some the largest known bony fish. Throughout recorded history, the Atlantic bluefin tuna has been highly prized as a food fish. Bluefin have been a valuable commercial catch from the time of the Greeks and Phoenicians to the modern era. Besides their value as food and in commerce, the great size that the bluefin can attain and the speed and power they display in their ecological role as apex predators has attracted the admiration and respect of both ancient and modern fishermen, as well as writers, sport anglers and scientists.

Today, the Atlantic bluefin tuna is the foundation of one of the world’s most lucrative commercial fisheries. Medium-sized and large individuals are heavily targeted for the Japanese raw fish market, where all species of bluefin are highly prized for sashimi. This commercial importance has led to severe overfishing. The International Commission for the Conservation of Atlantic Tunas (ICCAT) affirmed in October 2009 that Atlantic bluefin tuna stocks are declining dramatically, by 72% in the Eastern Atlantic, and by 82% in the Western Atlantic.[1] On October 16, 2009 Monaco formally recommended Endangered Atlantic bluefin tuna for an Appendix I CITES listing and international trade ban. In early 2010, European officials, led by the French ecology minister, increased pressure to ban the commercial fishing of bluefin tuna internationally. [2]

Bluefin are captured for the commercial market commercial fishermen using purse seine gear, assorted hook-and-line gear, most important the longline, and in certain areas by harpooners. Atlantic bluefin are also taken commercially by heavy rod and reel gear. The bluefin tuna has long been one of the most important big-game species sought by sports fishermen. Sport fishing for the Atlantic bluefin tuna has existed since the 1930s and continues to be popular to this day, particularly in the United States but also in Canada, Spain, France and Italy.

The bluefin tunas are among the largest and fastest open ocean fishes and are important economically and culturally in many parts of the world. There are three species of bluefin tuna- the prized and endangered Atlantic bluefin (Thunnus thynnus), the widespread but similarly overfished Pacific bluefin (Thunnus orientalis), and the smaller but also tasty Southern bluefin tuna (Thunnus mccoyi). Bluefin tunas are spectacular swimming machines with torpedo-shaped, streamlined bodies built for speed and high-powered muscle and tendon systems that have evolved for high endurance. Bluefin tunas are warm-blooded, a rare trait among fish, and are thus able to adjust their body temperature, keeping their body temperatures higher than the surrounding water, which is why they are so well adapted to cooler ocean waters. Bluefin tunas are considered exceptionally good to eat, particularly by those who enjoy various forms of raw fish such as sushi and sashimi, and all species of bluefin tuna are pursued constantly by the fishing industry and by sport fishermen. As a result, overfishing throughout their range has driven their numbers to critically low levels. Some populations of bluefin tuna are thought be extinct and others are critically endangered.