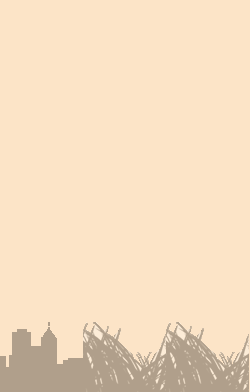 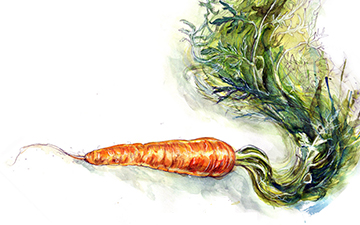 The cultivated carrot is believed to have originated in Afghanistan.

Cool, Warm
Graphic by Amy Hollidaywww.amyholliday.co.uk
Photo by Larsiniocommons.wikimedia.org/wiki/File:CarrotDiversityLg.jpg
The carrot (Daucus carota subsp. sativus; etymology: from Late Latin carōta, from Greek καρωτόν karōton, originally from theIndo-European root ker- (horn), due to its horn-like shape) is a root vegetable, usually orange in colour, though purple, red, white, and yellow varieties exist. It has a crisp texture when fresh. The most commonly eaten part of a carrot is a taproot, although the greens are sometimes eaten as well. It is a domesticated […] read more

The carrot (Daucus carota subsp. sativus; etymology: from Late Latin carōta, from Greek καρωτόν karōton, originally from theIndo-European root ker- (horn), due to its horn-like shape) is a root vegetable, usually orange in colour, though purple, red, white, and yellow varieties exist. It has a crisp texture when fresh. The most commonly eaten part of a carrot is a taproot, although the greens are sometimes eaten as well. It is a domesticated form of the wild carrot Daucus carota, native to Europe and southwesternAsia. The domestic carrot has been selectively bred for its greatly enlarged and more palatable, less woody-textured edible taproot. The Food and Agriculture Organization of the United Nations (FAO) reports that world production of carrots and turnips (these plants are combined by the FAO for reporting purposes) for calendar year 2011 was almost 35.658 million tonnes. Almost half were grown in China. Carrots are widely used in many cuisines, especially in the preparation of salads, and carrot salads are a tradition in many regional cuisines.

The carrot is a variable biennial plant, usually growing up to 1 m tall and flowering from June to August. The umbels are claret-coloured or pale pink before they open, then bright white and rounded when in full flower, measuring 3–7 cm wide with a festoon ofbracts beneath; finally, as they turn to seed, they contract and become concave like a bird’s nest. The dried umbels detach from the plant, becoming tumbleweeds.[1]

Similar in appearance to the deadly poison hemlock,[2][3] D. carota is distinguished by a mix of bi-pinnate and tri-pinnate leaves, fine hairs on its stems and leaves, a root that smells like carrots, and occasionally a single dark red flower in its center.

The wild ancestors of the carrot are likely to have come from Iran and Afghanistan, which remain the centre of diversity of Daucus carota, the wild carrot. Selective breeding over the centuries of a naturally occurring subspecies of the wild carrot, Daucus carotasubsp. sativus, to reduce bitterness, increase sweetness and minimise the woody core, has produced the familiar garden vegetable.[4][5]

In early use, carrots were grown for their aromatic leaves and seeds, not their roots. Carrot seeds have been found in Switzerlandand Southern Germany dating to 2000–3000 BC.[6] Some relatives of the carrot are still grown for their leaves and seeds, such asparsley, fennel, dill and cumin. The first mention of the root in classical sources is in the 1st century. The modern carrot originated in Afghanistan about 1100 years ago.[7] It was purple in the 10th century in such locations as the Middle East, India and Europe.[8]It appears to have been introduced to Europe via Spain by the Moors in the 8th century.[9] The 12th-century Arab Andalusianagriculturist, Ibn al-‘Awwam, describes both red and yellow carrots;[10] Simeon Seth also mentions both colours in the 11th century.[11] Cultivated carrots appeared in China in the 14th century, and in Japan in the 18th century.[12] Orange-coloured carrots appeared in the Netherlands, where the flag included orange, in the 17th century.[8] These, the modern carrots, were intended by the antiquary John Aubrey (1626–1697) when he noted in his memoranda “Carrots were first sown at Beckington in Somersetshire Some very old Man there [in 1668] did remember their first bringing hither.”[13] European settlers introduced the carrot to Colonial America in the 17th century.[14]

Purple carrots, still orange on the inside, were sold in British stores starting in 2002.[8]

Polyacetylenes can be found in Apiaceae vegetables like carrots where they show cytotoxic activities.[15][16]Falcarinol and falcarindiol (cis-heptadeca-1,9-diene-4,6-diyne-3,8-diol)[17] are such compounds. This latter compound shows antifungal activity towards Mycocentrospora acerina and Cladosporium cladosporioides.[17]Falcarindiol is the main compound responsible for bitterness in carrots.[18]

Most carrot cultivars are about 88% water, 7% sugar, 1% protein, 1% fibre, 1% ash, and 0.2% fat. The fibre comprises mostlycellulose, with smaller proportions of hemicellulose and lignin. Carrots contain almost no starch.[21] Free sugars in carrot include sucrose, glucose, xylose and fructose. Nitrite and nitrate contents are about 40 and 0.41 milligrams per 100 grams (fresh), respectively. Most of the taste of the vegetable is due to glutamic acid and other free amino acids. Other acids present in trace amounts include succinic acid, α-ketoglutaric acid, lactic acid and glycolic acid; the major phenolic acid is caffeic acid.[22]

The carrot gets its characteristic and bright orange colour from β-carotene, and lesser amounts of α-carotene and γ-carotene. α and β-carotenes are partly metabolised into vitamin A in humans.[23][24] β-carotene is the predominant carotenoid, although there are lesser amounts of α-carotene and γ-carotene. There are typically between 6000 and 54,000 micrograms of carotenoids per 100 grams of carrot root. Carrot extracts are used by poultry producers to improve animal skin and alter the colour of egg yolk.[21] Massive overconsumption of carrots can cause carotenosis, a benign condition in which the skin turns orange.[25] Carrots are also rich in antioxidants and minerals.[26] Ethnomedically, the roots are used as an emmenagogue (to increase blood flow in the pelvic area and uterus), a carminative (to reduce flatulence), to treat digestive problems, intestinalparasites, and tonsillitis or constipation.[27]

Lack of vitamin A can cause poor vision, including night vision, and this can be remedied by adding vitamin A to the diet.[citation needed] An urban legend states that eating large quantities of carrots will allow one to see in the dark. This myth developed from stories about British gunners in World War II, who were able to shoot down German planes at night. The rumour arose during the Battle of Britain when the RAF circulated a story about their pilots’ carrot consumption in an attempt to cover up the discovery and effective use of radar technologies in engaging enemy planes, as well as the use of red light (which does not destroy night vision) in aircraft instruments.[28] It reinforced existing German beliefs,[29] and helped to encourage Britons who were trying to improve their night vision during the blackout to grow and eat the vegetable, which was not rationed like most other foodstuffs. A “Dr. Carrot” advertising campaign encouraged its consumption.[30]