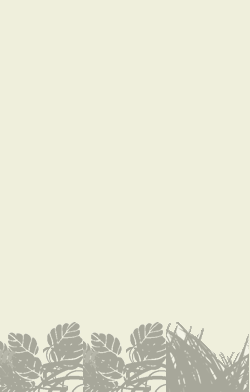 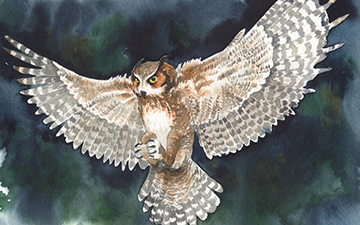 • Bubo virginianus has a FLIGHT of 2

cold, cool, warm
Graphic by Sarah Stringhettasaraquarelle.deviantart.com/
Photo by Neal Herbertcommons.wikimedia.org/wiki/File:Bubo_virginianus_-Yellowstone_National_Park,_USA-8.jpg
The Great Horned Owl (Bubo virginianus), also known as the Tiger Owl, is a large owl native to the Americas. It is an adaptable bird with a vast range and is the most widely distributed true owl in the Americas.[2] The Great Horned Owl is the heaviest extant owl in Central and South America and is the second heaviest owl in North America, after the closely related but […] read more

The Great Horned Owl (Bubo virginianus), also known as the Tiger Owl, is a large owl native to the Americas. It is an adaptable bird with a vast range and is the most widely distributed true owl in the Americas.[2]

There is considerable variation in plumage coloration but not in body shape. This is a heavily built, barrel-shaped species that has a large head and broad wings. Adults have large ear tufts and it is the only very large owl in its range to have them.[3][6] Thefacial disc is reddish, brown or gray in color and there is a variable sized white patch on the throat. The iris is yellow, except in the amber-eyed South American Great Horned Owl (B. V. nacurutu). Its “horns” are neither ears nor horns, simply tufts of feathers. The underparts are usually light with some brown barring; the upper parts are generally mottled brown. Most subspecies are barred along the sides as well. The legs and feet are covered in feathers up to the talons, with some black skin peeking out from around the talons. The feet and talons are distinctly large and powerful and only other Bubo owls have comparably formidable feet. There are individual and regional variations in color; birds from the subarctic are a washed-out, light-buff color, while those from Central America can be a dark chocolate brown.[6]

Its call is normally a low-pitched but loud ho-ho-hoo hoo hoo but it can occasionally be reduced to four syllables instead of five. The female’s call is higher and rises in pitch at the end of the call. Young owls still in the care of their parents make loud, persistent hissing or screeching sounds that are often confused with the calls of the Barn Owl (Tyto alba).[6]

The combination of the species’ bulk, prominent ear-tufts and barred plumage distinguishes it through much of the range. However, the Great Horned Owl can be easily confused with the Lesser or Magellanic Horned Owl (B. magellanicus), with which it may have limited overlap in southernmost South America. The Magellanic was once considered a subspecies of the Great Horned, but it is markedly smaller with smaller feet and a smaller head and is generally more lightly barred on the underside.[6] Other eagle-owls may superficially be somewhat similar, but the species is allopatric with the exception of the Magellanic species. In North America, the Long-eared Owl (Asio otus) can be somewhat similarly marked and shares the feature of prominent ear tufts, but it is considerably smaller and more slender, with a grayish line running down the middle of the facial disc and with ear tufts located more closely to each other on the top of the head.[7]