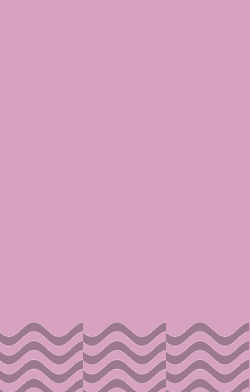 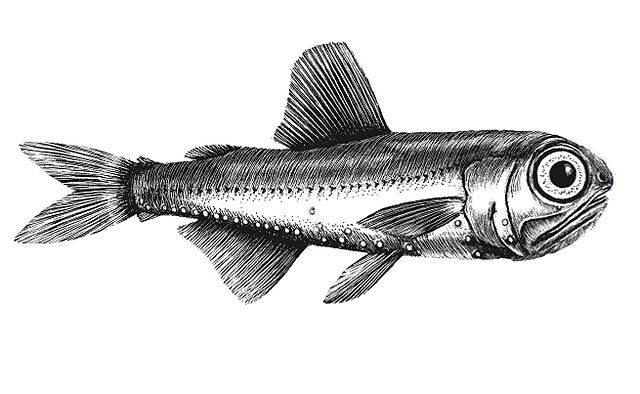 cold, cool
Graphic by O'Reillyanimals.oreilly.com/
Lanternfishes (or myctophids, from the Greek mykter, “nose” and ophis, “serpent”) are small mesopelagic fish of the large family Myctophidae. One of two families in the order Myctophiformes, the Myctophidae are represented by 246 species in 33 genera, and are found in oceans worldwide. They are aptly named after their conspicuous use of bioluminescence. Their […] read more
Sorry, there is no photo available. If you have one, please submit here.

Lanternfishes (or myctophids, from the Greek mykter, “nose” and ophis, “serpent”) are small mesopelagic fish of the large family Myctophidae. One of two families in the order Myctophiformes, the Myctophidae are represented by 246 species in 33 genera, and are found in oceans worldwide. They are aptly named after their conspicuous use of bioluminescence. Their sister family, the Neoscopelidae, are much fewer in number but superficially very similar; at least one neoscopelid shares the common name ‘lanternfish’: the large-scaled lantern fish, Neoscopelusmacrolepidotus.

Sampling via deep trawling indicates lanternfish account for as much as 65% of all deep-sea fish biomass.[1]Indeed, lanternfish are among the most widely distributed, populous, and diverse of all vertebrates, playing an important ecological role as prey for larger organisms. With an estimated global biomass of 550 – 660 million metric tonnes, several times the entire world fisheries catch, lanternfish also account for much of the biomass responsible for the deep scattering layer of the world’s oceans. In the Southern Ocean, myctophids provide an alternative food resource to krill for predators such as squid and the king penguin. Although plentiful and prolific, currently only a few commercial lanternfish fisheries exist: limited operations off South Africa, in the sub-Antarctic, and in the Gulf of Oman.

Lanternfish typically have a slender, compressed body covered in small, silvery deciduous cycloid scales (ctenoid in four species), a large bluntly rounded head, large elliptical to round lateral eyes (dorsolateral in Protomyctophumspecies), and a large terminal mouth with jaws closely set with rows of small teeth. The fins are generally small, with a single high dorsal fin, a forked caudal fin, and an adipose fin. The anal fin is supported by a cartilaginous plate at its base, and originates under, or slightly behind, the rear part of the dorsal fin. The pectoral fins, usually with eight rays, may be large and well-developed to small and degenerate, or completely absent in a few species. In some species, such as those of the genus Lampanyctus, the pectorals are greatly elongated. Most lanternfish have a gas bladder, but it degenerates or fills with lipids during the maturation of a few species. The lateral line is uninterrupted.

In all but one species, Taaningichthys paurolychnus, a number of photophores (light-producing organs) are present; these are paired and concentrated in ventrolateral rows on the body and head. Some may also possess specialised photophores on the caudal peduncle, in proximity to the eyes (e.g., the “headlights” of Diaphus species), and luminous patches at the base of the fins. The photophores emit a weak blue, green, or yellow light, and are known to be arranged in species-specific patterns. In some species, the pattern varies between males and females. This is true for the luminous caudal patches, with the males’ being typically above the tail and the females’ being below the tail.[1]

Lantern fish are generally small fish, ranging from about 2 to 30 cm (0.79 to 11.81 in) in length, with most being under 15 cm (5.9 in). In life, shallow-living species are an iridescent blue to green or silver, while deeper-living species are dark brown to black. It is the most populous fish species in the open ocean with a density of approximately one per cubic metre.[2]