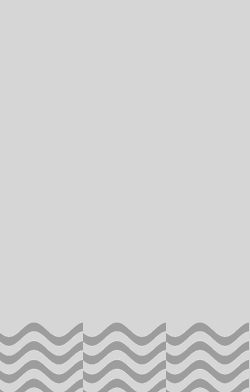 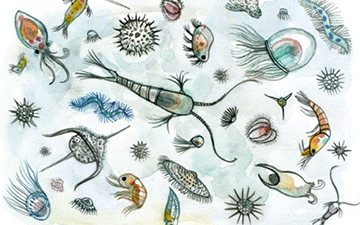 Sorry, there is no photo available. If you have one, please submit here .
Animalia, Anthropoda

Play: Zooplankton has a MOVE of 1.
“Many of these creatures so low in the scale of nature are most exquisite in their forms & rich colours. — It creates a feeling of wonder that so much beauty should be apparently created for such little purpose.” (Darwin on plankton).

cold, cool, warm
Graphic by DIana Sudykawww.dianasudyka.com/
Zooplankton /ˌzoʊ.əˈplæŋktən/ are heterotrophic (sometimes detritivorous) plankton. Plankton are organisms drifting in oceans, seas, and bodies of fresh water. The word “zooplankton” is derived from the Greek zoon (ζῴον), meaning “animal”, and planktos (πλαγκτός), meaning “wanderer” or “drifter”.[1] Individual zooplankton are usually microscopic, but some (such as jellyfish) are larger and visible with the naked […] read more
Sorry, there is no photo available. If you have one, please submit here.

Zooplankton /ˌzoʊ.əˈplæŋktən/ are heterotrophic (sometimes detritivorous) plankton. Plankton are organisms drifting in oceans, seas, and bodies of fresh water. The word “zooplankton” is derived from the Greek zoon (ζῴον), meaning “animal”, and planktos (πλαγκτός), meaning “wanderer” or “drifter”.[1] Individual zooplankton are usually microscopic, but some (such as jellyfish) are larger and visible with the naked eye.

Zooplankton is a categorization spanning a range of organism sizes including small protozoans and largemetazoans. It includes holoplanktonic organisms whose complete life cycle lies within the plankton, as well asmeroplanktonic organisms that spend part of their lives in the plankton before graduating to either the nektonor a sessile, benthic existence. Although zooplankton are primarily transported by ambient water currents, many have locomotion, used to avoid predators (as in diel vertical migration) or to increase prey encounter rate.

Ecologically important protozoan zooplankton groups include the foraminiferans, radiolarians anddinoflagellates (the latter are often mixotrophic). Important metazoan zooplankton include cnidarians such asjellyfish and the Portuguese Man o’ War; crustaceans such as copepods and krill; chaetognaths (arrow worms); molluscs such as pteropods; and chordates such as salps and juvenile fish. This wide phylogeneticrange includes a similarly wide range in feeding behavior: filter feeding, predation and symbiosis withautotrophic phytoplankton as seen in corals. Zooplankton feed on bacterioplankton, phytoplankton, other zooplankton (sometimes cannibalistically), detritus (or marine snow) and even nektonic organisms. As a result, zooplankton are primarily found in surface waters where food resources (phytoplankton or other zooplankton) are abundant.

Just as any species can be limited within a geographical region, so is zooplankton. However, species of zooplankton are not dispersed uniformly or randomly within a region of the ocean. Instead ‘patches’ of zooplankton species (this also applies to phytoplankton) exist throughout the ocean. Though few physical barriers exist above the mesopelagic, specific species of zooplankton are strictly restricted by salinity and temperature gradients; while other species can withstand wide temperature and salinity gradients.[2] Zooplankton patchiness can also be influenced by biological factors, as well as other physical factors. Biological factors include breeding, predation, concentration of phytoplankton, and vertical migration.[2] The physical factor that influences zooplankton distribution the most is mixing of the water column (upwelling and downwelling along the coast and in the open ocean) that affects nutrient availability and, in turn, phytoplankton production.[2]

Through their consumption and processing of phytoplankton and other food sources, zooplankton play a role in aquatic food webs, as a resource for consumers on higher trophic levels (including fish), and as a conduit for packaging the organic material in the biological pump. Since they are typically small, zooplankton can respond rapidly to increases in phytoplankton abundance,[clarification needed] for instance, during the spring bloom.

Zooplankton can also act as a disease reservoir. Crustacean zooplankton have been found to house the bacterium Vibrio cholerae, which causescholera, by allowing the cholera vibrios to attach to their chitinous exoskeletons. This symbiotic relationship enhances the bacterium’s ability to survive in an aquatic environment, as the exoskeleton provides the bacterium with carbon and nitrogen.[3]