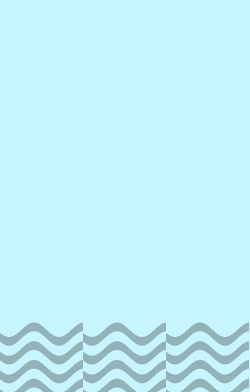 Sorry, there is no photo available. If you have one, please submit here .
Animalia, Chordata, Chondrichthyes

• Galeocerdo cuvier has a MOVE of 2.

• Galeocerdo cuvier can only prey on compatible SPECIES with a SCALE of 5 or higher.

cool, warm
Graphic by Nadir Balansci-ence.org
The tiger shark, Galeocerdo cuvier, is a species of requiem shark and the only member of the genus Galeocerdo. Commonly known as sea tiger, the tiger shark is a relatively large macropredator, capable of attaining a length of over 5 m (16 ft).[3] It is found in many tropicaland temperate waters, and is especially common around central Pacific islands. Its name derives from the […] read more
Sorry, there is no photo available. If you have one, please submit here.

The tiger shark, Galeocerdo cuvier, is a species of requiem shark and the only member of the genus Galeocerdo. Commonly known as sea tiger, the tiger shark is a relatively large macropredator, capable of attaining a length of over 5 m (16 ft).[3] It is found in many tropicaland temperate waters, and is especially common around central Pacific islands. Its name derives from the dark stripes down its body which resemble a tiger‘s pattern, which fade as the shark matures.[4]

The tiger shark is a solitary, mostly nocturnal hunter. Its diet includes a wide variety of prey, ranging from crustaceans, fish, seals, birds, squid, turtles, and sea snakes; to dolphins and even other smaller sharks. The tiger shark is considered a near threatened species due tofinning and fishing by humans.[2]

While the tiger shark is considered to be one of the sharks most dangerous to humans, the attack rate is surprisingly low according to researchers.[5] The tiger is second on the list of number of recorded attacks on humans, with the great white shark being first.[6][7] They often visit shallow reefs, harbors and canals, creating the potential for encounter with humans.[4]

The tiger shark is often found close to the coast, mainly in tropical and subtropical waters throughout the world.[6] Along with the great white shark, Pacific sleeper shark, Greenland shark and sixgill shark, the tiger shark is among the largest extant sharks.[6] Its behavior is primarily nomadic, but is guided by warmer currents, and it stays closer to the equator throughout the colder months. It tends to stay in deep waters that line reefs, but it does move into channels to pursue prey in shallower waters. In the western Pacific Ocean, the shark has been found as far north as Japan and as far south as New Zealand.[3]

there are over 9,000 tiger sharks can be seen at Gulf of Mexico, North American beaches and parts of South America. It is also commonly known in the Caribbean Sea. Other locations where tiger sharks are seen include Africa, People’s Republic of China, Hong Kong, India,Australia and New Zealand.[4]

Certain tiger sharks have been recorded at depths just shy of 900 metres (3,000 ft)[6] but some sources claim they move into shallow water normally thought to be too shallow for a species of its size.[4] A recent study showed the average tiger shark would be recorded at 350 metres (1,100 ft), making it uncommon to see tiger sharks in shallow water. However, tiger sharks in Hawaii have been observed in depths as shallow as 10 ft and regularly observed in coastal waters at depths of 20 to 40 ft. They often visit shallow reefs, harbors and canals, creating the potential for encounters with humans.[8]

The skin of a tiger shark can typically range from blue to light green with a white or light yellow underbelly. The advantage of this is that when it is hunting for its prey, when prey looks at the shark from above, the shark will be camouflaged since the water below is darker. And when prey is below the shark and looks up, of course because of the sun, it is lighter so that the light underbelly will also camouflage the shark. Dark spots and stripes are most visible in young sharks and fade as the shark matures. Its head is somewhat wedge-shaped, which makes it easy to turn quickly to one side.[4][10] They have small pits on the snout which hold electro-receptors called the ampullae of Lorenzini which enable them to detect electric fields, including the bio-electricity generated by prey.[11] Tiger sharks also have a sensory organ called a lateral line which extends on their flanks down most of the length of their sides. The primary role of this structure is to detect minute vibrations in the water. These adaptations allow the tiger shark to hunt in darkness and detect hidden prey.[12]

A reflective layer behind the tiger shark’s retina called the tapetum lucidum allows light-sensing cells a second chance to capture photons of visible light, enhancing vision in low light conditions. A tiger shark generally has long fins to provide lift as the shark maneuvers through water, while the long upper tail provides bursts of speed. Tiger sharks normally swim using small body movements.[13] Its high back anddorsal fin act as a pivot, allowing it to spin quickly on its axis, though the shark’s dorsal fins are distinctively close to its tail.[11]

Its teeth are specialized to slice through flesh, bone, and other tough substances such as turtle shells. Like most sharks, however, its teeth are continually replaced by rows of new teeth.[11]